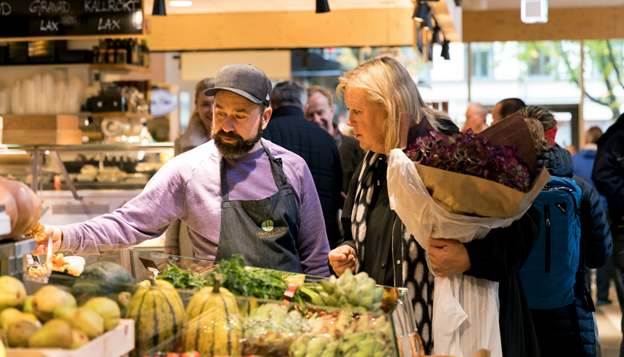 What We Can Learn from UNFI, Whole Foods, and the Brokerage Landscape

The natural food industry is experiencing substantial growth while undergoing disruptive change across the supply-chain. The market for natural, organic, and specialty foods has seen an incremental increase over the past few years, as independent and chain retailers continue to respond to consumer demand. However, it’s not business as usual for natural food manufacturers, suppliers, and retailers.

Recent manoeuvres from distribution giants United Natural Foods Inc. (UNFI) and retail heavy-weights Whole Foods (recently purchased by e-commerce company Amazon) are indicative of a rapidly changing infrastructure – one in which cost-cutting and consolidation are the norms. Meanwhile, broker leverage continues to slide as manufacturers and retailers push for change.

Based on a market research report into the growth prospects for UNFI, here are four trends in the natural food industry that will shape the landscape of the future:

What we can say for sure is that the market for organic and specialty foods is significant, and only getting larger. Retail sales of natural and organic food and beverage in the United States grew from $37.43 billion in 2016 to $40.05 billion in 2017. This is undoubtedly the result of consumers understanding the health and wellness benefits of organic and specialty foods, and aligning their consumption patterns to match. Demand for local, organic, and GMO-free items are all on the rise.

A select few distributors played a leading role in getting natural food products from the warehouse to store shelves. United Natural Foods Inc. (UNFI) is one of them, and they are still the leading distributor of organic and specialty foods today. However, competition is stronger and more varied than ever. With increasing consumer demand comes more competition, both nationally and regionally.

On the national scale, traditional competitors like KeHe and Supervalu are going head-to-head with UNFI in the pursuit of offering the lowest cost for the most volume of goods.

On the regional scale, major distributors are up against a plethora of smaller distributors that are more responsive to consumer needs and able to innovate faster.

There is also the presence of Amazon Inc. to be grappled with, a new player in the food and beverage industry. The e-commerce giant recently purchased Whole Foods, who are UNFI’s most lucrative customer and have begun laying out plans to take some of the distribution markets away from UNFI.

What does competition mean in the distribution space?

No matter how involved Amazon gets in the distribution market, it will inevitably cause ripples throughout the industry. We can expect to see:

Conventional grocery stores have been slow to integrate into the natural food industry. Independent natural food stores and distributors were initially able to capture most of the market – but the days of independent retailer dominance are over.

By 2018, a lot of major grocers have begun investing in natural foods. Sprouts, Wegmans, Kroeger, and Walmart all have a massive stake in the market. Some chains – like The Kroger Corp., for instance – have a line of specialty products to sell in their stores.

Soon all the major grocery store chains will be selling a high volume of natural foods, either from their line or elsewhere. It remains to be seen if consumers respond approvingly to specialty foods manufactured by grocery chains like Walmart, a company known for selling nutrition-deficient foods at a low price. Even if natural foods do not become extremely popular at major grocery chains, it still represents a major market share shifting from independents to the ‘mainstream’ market.

For distributors, conventional supermarkets making their line of product means a shrinking market. A lot of the conventional stores entering the natural foods market are investing in self-distribution. Publix, Wegmans, Albertsons, and others all have the means to build a supply chain that works for them. This is also the model that Amazon is planning to develop with Whole Foods. It is not ideal for distributors, who are feeling the squeeze from many directions.

For consumers, the emergence of natural food products in conventional grocery stores should be welcomed. Why? Because the prices are lower for similar products, even if the selection is limited. Many experts project that leading grocery chains will subsume most of the natural foods market within a few years. Small independents will be forced to innovate by finding, sourcing, and selling new products to a dedicated base of health-conscious customers.

Distribution companies usually fall into two operational models when dealing with retailers: full-service or wholesale. Each has benefits and drawbacks, depending on the size and needs of the retailer.

In contrast, the wholesale model includes:

Major distribution companies like UNFI and KeHe have doubled down on the wholesale model to maximize revenue. The intention was likely to save on expenses to ensure strong revenue numbers – but at what cost? Some retailers surely like the fact that they can pay less for distribution service, though the pendulum is swinging in favor of a full-service offering.

Spotlight on UNFI and Whole Foods

To get a clearer picture of where the industry is going, it will help to shine the spotlight on two key industry players. UNFI and Whole Foods are indicative of the strength of the natural food industry today. Both companies are hugely successful and have collaborated to bring natural food products into popular consciousness. Based on the four trends mentioned above, here is a rundown of the prospects for UNFI and Whole Foods.

Shrinking margins, limited opportunities. Operating costs for UNFI are high. The company has hundreds of distribution centers across the country and warehousing costs are only going up. For example, new truck driver regulations have meant a delay in delivery times across the board. Rather than soak up these expenses as part of their operating costs, UNFI tends to lump additional service fees into the price for retailers. Decisions like this one will only induce retailers to look elsewhere for a more full-service oriented experience which may cost more but come with added benefits.

To increase profit margins, UNFI should look to:

Purchase of Whole Foods by Amazon likely to shrink margins even further. Nearly every industry commentator agrees that Amazon will sever ties between UNFI and Whole Foods when the distribution contract is up in 2025.

UNFI currently gets about 1/3rd of its business from Whole Foods, albeit it at a discounted price (8-12% margins). While it’s unlikely that Amazon will cut UNFI entirely out of the supply chain, they will certainly take a considerable portion of the business away.

Expansion into Fresh Foods to stay on top of market trends. The boardroom at UNFI has made an initial decision: expansion into the fresh produce market. On paper, this looks like a wise decision for two reasons. First, it matches consumer preferences. Second, none of the big chains (including Whole Foods) can distribute fresh produce on a massive scale.

To succeed in this new market, UNFI will have to overcome the following challenges:

Most importantly, the distribution giants need to move away from the practice of “bidding out.” They have already come under criticism from retailers for buying the cheapest produce available and selling it at an inflated price. This approach ignores all the dynamic costs involved in growing and asks the grower to swallow as much of those costs as possible. Why can they get away with this? Because competition in the fresh produce market is weak.

Whole Foods is a major retailer in the natural food/specialty foods industry. Formed in 1980, it has grown to become the most extensive network of supermarkets in the United States, specializing in natural and organic foods. There is arguably no more influential company and brand responsible for leading the organic and specialty foods movement across the United States. Success came incrementally for the Austin-based company, who gradually expanded their reach to include 473 stores in 2018. However, perhaps due to aggressive growth initiatives, the past few years have seen declining sales and an unclear future.

The future of Whole Foods was made abundantly more clear in August of 2017 when it was sold to e-commerce giants Amazon. What will the sale mean for the natural food industry as a whole?

On a more general level, the presence of Amazon is indicative of where the natural foods retail market is going. Relying on technological innovation to disrupt existing relationships is helpful because it is bound to bring prices down. UNFI and others have had to pack extra costs into the supply chain to ensure they make a profit. These added costs are lumped onto the manufacturer or the retailer, and artificially inflate the cost of goods.

If Amazon and Whole Foods can bring costs down by removing arbitrary service costs, then the market will expand. The natural food industry is, after all, a consumer based industry. Amazon sees an opportunity to swallow some expenses, build out their distribution networks to include food and beverages, and ultimately, make natural foods affordable to mainstream markets.

The Broker Situation: What Has Changed?

Given the undulating landscape of the natural food industry, brokers are faced with plenty of material and existential challenges. What will their role be in 10 years once Amazon has settled into the market? Here are four ways in which the broker situation has changed in recent years:

Manufacturers do not sell bulk product three or four months in advance at a promotional rate anymore because they lose out on revenue. As a result, distributors need to make their profits elsewhere: in cutting labor costs, buying cheaper fuel, or other means. This has been their approach for the past few decades, but they have run out of options. Perhaps the emergence of an e-commerce disruptor like Amazon will force distributors to shrink and specialize.

These are some of the major trends and developments taking place in the natural food industry today. As the consumer market for natural and specialty foods continues to grow, conventional chain grocers and an e-commerce giant have decided to get involved. It remains to be seen whether consolidation and cost-cutting strategies trim margins enough to keep existing distribution companies like UNFI profitable.

3 Replies to “The Changing Nature of the Natural Food Industry”